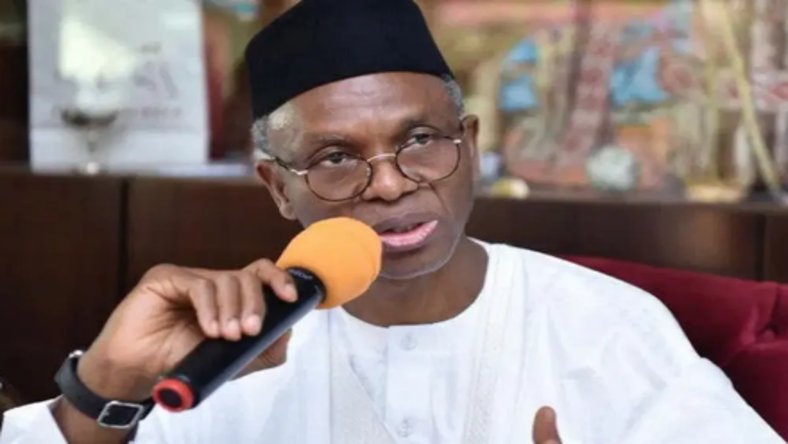 The Governor of Kaduna State, Nasir El-Rufai, has called on security agencies to take the war to bandits who terrorise the nation and wipe them out.
El-Rufai stated this during the town hall meeting organized by the Ministry of Information and Culture on national security in Kaduna State with the theme, “Setting Benchmark for Enhanced and National Unity in Nigeria”.

According to him, under the constitution, bandits who terrorize the country have lost their rights to life and ought to be wiped out. He also noted that security agencies should not only respond to incidents of banditry as it is unacceptable.
He said: “The bandits are at war with Nigeria, and there is no other way to approach the current insurgency but for security forces to take the fight to the bandits and recover forests where they are occupying.

“The security agencies mostly react to cases of banditry and abduction, we are in a war with these terrorist challenging the sovereignty of the Nigerian state. “Our security forces must collaborate to take the war to the bandits and terrorist, recover and restore the forest to enable our law-abiding citizens to engage in legitimate farming and livestock production,”
The Governor noted the need for sustained action against criminals, adding that it will be advantageous to have security operations that are proactive to cripple the outlaws and reassure ordinary citizens. He said the government must identify and deal with non-state-actors and others challenging the existence of the country.

El-Rufai advised that security forces should be well equipped to deal with the insurgency, adding that the judiciary should also be decentralized to serve justice.
“To address the banditry problem, we must implement the National Livestock Transformation Plan, NLTP, already produced four years ago to enable accelerated investment in modern animal husbandry on operating rapid decentralization of herders in known locations,” he said.
“The situation in which the security agencies mostly only react to cases of banditry and abduction is unacceptable.

“We are in a war with these terrorists who are challenging the sovereignty and monopoly of the instruments of coercion of the Nigerian state and its territory.
“Our security forces must collaborate to take the war to them, recover and restore the un-governed forests these terrorists occupy, and enable our law-abiding citizens to engage in their legitimate pursuits,” the Governor said.
He reiterated that bandits must be “wiped out” because they had lost their right to life by the constitution. He said: “These bandits have lost their right to life under our constitution and must be wiped out in their entirety. There is no other way to approach the current insurgency situation today as far as governmental action is concerned.”

“Notions of a common humanity, not to talk of a common citizenship are not as widely or deeply shared as it would appear. Identity politics holds sway. This reflects the absence of an elite consensus about who we are and how we should live together,” he said. The Governor said more responsibilities should be given to states so that the federal government would not be blamed for everything that goes wrong.
“Centralized policing in a federation is not only a contradiction in terms. The state governments today bear most of the burden of the federal police’s running costs anyway, so why not the sub-nationals of the state police now. So I repeat my persistent call for the state police as soon as possible.
“To address the banditry prevalent in the northwest and north-central, we must implement the national livestock transformation plan already produced four years ago,” El-Rufai added.