Nigerian media mogul, Mo Abudu has announced a collaboration with American film producer, Will Packer on a project which centers around the story of the incarcerated Nigerian influencer, Ramon Abbas a.k.a Hushpuppi.

Will Packer productions and Mo Abudu’s Ebonylife Studios are teaming up to develop an untitled project said to be a globetrotting action thriller hybrid of Steven Spielberg’s 2002 pseudo biographical crime film, ‘Catch Me If You Can’ and Bryan Singer’s 1995 neo-noir mystery thriller film,‘The Usual Suspects’.

Ebonylife Studios and Will Packer secured the rights to Evan Ratliff’s Bloomberg article, “The Fall of the Billionaire Gucci Master”, based on incarcerated Nigerian fraudster Ramon Abbas aka Hushpuppi. The untitled project is set to be an action thriller detailing the Evan Ratliff written article on how Hushpuppi was nabbed by the American government for laundering millions of dollars. It will be produced by James Lopez for Will Packer and Abudu for Ebonylife.

Confirming the new partnership, Mo Abudu revealed in an Instagram post that she pitched the story idea to Will Packer productions in 2020.

Abudu wrote, “When the Hushpuppi story made headlines last year, I pitched the story idea to @willpowerpacker and James Lopez. They bought the idea and as headlined in this press release, together we won the rights to the Bloomberg article by Evan Ratliff mentioned above. The rights were won after a highly contested derby by several producers and is now set up at Universal Pictures”.

Speaking to Deadline, Abudu said, “EbonyLife is uniquely positioned to ensure the depth and authenticity of this film. This is why we needed to partner with a major Hollywood producer like Will Packer Productions – they are equally invested in telling stories that resonate with our audiences. We understand the environment of poverty and deprivation that breeds highly talented and fundamentally flawed characters like Hushpuppi, and WPP knows how to create stories with global appeal.”

Packer added, “Ten months ago Mo pitched us a rich and entertaining concept steeped in Nigerian culture that can only be told with the help of her unique perspective. Together we knew Evan’s work was the definitive telling and the perfect anchor of this saga.”

Will Packer Productions’ films have earned more than $1 billion, with 10 opening at No. 1 at the domestic box office, including Girls Trip and Night School, the respective top-grossing comedies of 2018 and 2017.

On the other hand, EbonyLife has created more than 5,000 hours of original programming across a variety of genres, as well as seven feature films, three of which are the highest-grossing movies of all time at the Nigerian box office. 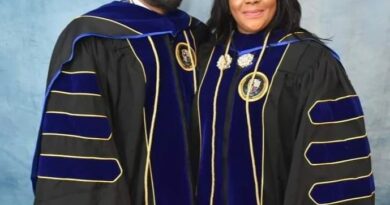 Comedienne Helen Paul Becomes a Professor In The U.S And Her Husband Graduates As Doctor Of Law