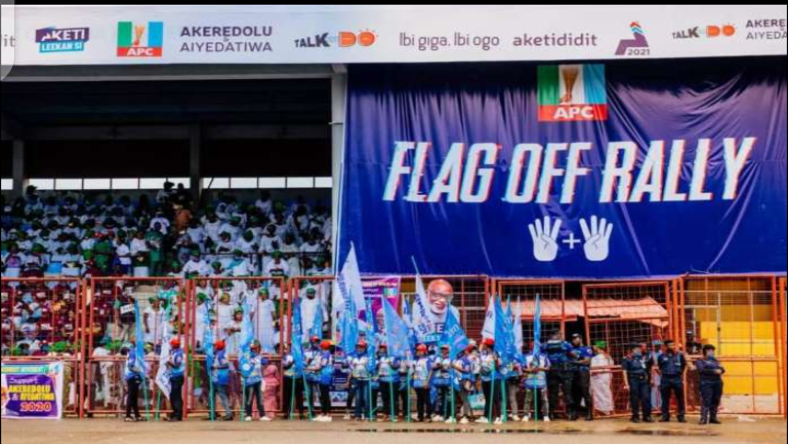 The National Leader of the All Progressive Congress (APC) and Former Governor of Lagos State and  Asiwaju Bola Ahmed Tinubu and former Governor of Osun State Chief Bisi Akande stormed Akure, the Ondo State capital, to rally support for Governor Rotimi Akeredolu in his reelection bid.

According to @OndoAPC on Twitter, Tinubu and Akande, who is APC ex-Interim National Chairman, alongside other party members, were received at the Akure Airport by the state governor on Saturday.The Governors and the crowd that attended the event defied the rain and waited for over three hours that the rally lasted.

The Chairman of the National Campaign Council, Governor Sanwo-Olu, said that Governor Akeredolu has performed creditably well and deserves to be re-elected for a second term in office.

He said the APC will continue to take the welfare of the people very serious, adding that Governor Akeredolu has done the party proud with his performance in the last three and a half years.

The Chairman of the National caretaker committee of the party, Buni, said the people of the State must not allow anyone to truncate the developmental stride of the Akeredolu administration.

Governor Akeredolu said he was prepared to do more than his administration has recorded in the last three and a half years in office.

The Governor warned the people not to allow those who will come to ruin the gains that have been entrenched in the last three and a half years across the State.

Earlier, the National Leader of the All Progressives Congress (APC), Asiwaju Bola Ahmed Tinubu, commended Akeredolu for his giants strides in the State, stating that he has laid a solid foundation for the State.

Tinubu said Akeredolu has done more than talk development and dedicated himself and his administration to bringing development to the state.

The ex Lagos Governor spoke at the commissioning of the newly built Internal Revenue Service office complex which was constructed by the Akeredolu administration.

He noted that since the Governor came on board in 2016, he has had his hands on the plough, recording one milestone after another.

‘Among the laudable projects he has launched is the Ore Industrial Hub which was commissioned by President Buhari. That industrial hub will bring needed employment and economic development to the deserving people living in the Ore vicinity.

‘Step by step, project by project, industrial hub by industrial hub is how we construct the foundation for durable progress and prosperity. Governor Akeredolu has done more than talk development; he has dedicated himself and his government to bringing development to this State,’ Tinubu said.

Recall that yesterday, President Muhammadu Buhari predicted an “easier clear victory” for Akeredolu.Buhari had also presented the party’s flag to Akeredolu at the Presidential Villa, Abuja. 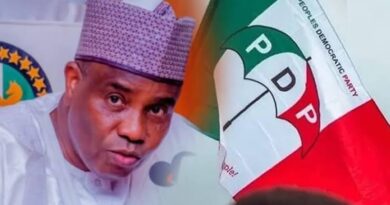 PDP Primaries: Tambuwal stepped down out of love for Nigeria and the PDP –  Daniel  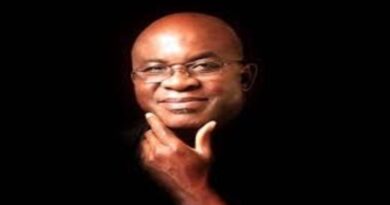 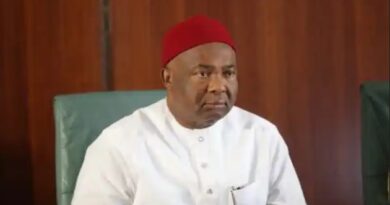